A Fantasy that went too far

I had always had a fantasy of being thrown away into a waste disposal site and buried alive in a landfill. The urge grew stronger as my years wore on, and then I found the perfect mechanism to make it happen. Of course it was still just going to be a fantasy, but I could at least make it seem more real, and partly play it out.

On my walk to work each day, I cut through the back of a shopping mall - the delivery & services area. I noticed that at one end there was a skip that would fill up with flat-packed cardboard. I noted that this was always empty on a Monday morning, and about half full on a Friday evening. This gave me my plan... I would climb in on Friday night when all the stores were closed and spend the night in there fantasising that a truck would take me away. I didn't realise at the time it would come true though. After weeks of plotting I decided to go ahead and see what it would be like to sleep the night in there, being careful that I wouldn't actually get trashed for real, just a fantasy, as I'd climb out again early Saturday morning before the shops opened.

I went to the pub as usual, and had quite a few drinks... I needed some courage to see this through after all.

I took a couple of small bondage items with me too, namely a ball gag, thick rubber hood and I also wore around my waist a thick rubber band about 8inches wide that was extremely tight. I'd be able to get my arms into it and at my sides with a struggle, but would be tricky to get them back out once in place. This would surely heighten the sense of my fantasy that this was for real I figured.

On my way home I stopped by the skip, noticed it was half full as per usual, and climbed in. I managed to climb under several of the flat-packed boxes until I was about half way down.

Some were vertical at the sides of the skip too, something I hadn't figured before, but made a nice kind of box-like enclosure for me. Once settled, with effort I strapped the ball-gag on, sealed my head with the rubber hood, aligned the breathing holes and worked my arms into the wide rubber strap inside my jeans. Everything felt fantastic and totally restrictive, I really felt like I had been placed there as trash and thrown away...   my mind wandered off and into a blissful drunken sleep.

I awoke the following day late in the morning to movement and noise above and around me. "Shit" I thought, "I mean't to get out first thing before any shop opened so nobody would see me...  too late for that now, I can hear them already throwing more stuff in here... I'll never be able to get out descreetly with the busy supermarket car park right beside." I figured I would probably have to stay as still as possible and ride this out until the shops closed again at around 6pm. I didn't know what the time was, but I was still tired and fell into another slumber.

As the day progressed, I lay there in the middle of the cardboard, boxed in, more flatpacked boxes were being added, and eventually the skip was filling up to the point where the shop worker had to climb in and shove cardboard down the sides and under the lid compressing it further, trying to cram in as much as possible.  Eventually it was absolutely packed to the brim and compacted as much as a man could do. I woke up to find myself completely unable to move and totally compressed in with it all..  not being able to move my elbows meant no possiblility to free my arms - I tried as hard as I could, but I really was stuck. This was suddenly fantasy turned reality as I panicked to try and force myself free..  there really was no chance.

For many hours that evening I tried to shift around and loosen some of the carboard, but it was packed too tight against the lid, and peices had been shoved vertically packing the sides - there was no hope in hell of getting out... I couldn't even get my arms free to remove my hood and gag... screaming would be futile...  I'd have to wait it out until the workers started again the next day and hope that they hear my muffled shouts. All evening I lay there, and eventually slept from the tiredness of the struggle. I was begining to calm down knowing I'd be able to come up with some excuse as to why I was there - some friends played a drunk prank on me or something.

The night passed and I awoke to the sounds of people shopping, cars parking, and general daily life distantly through all the compacted card. I tried my bonds once again, but to no avail.

I'd just have to wait until one of the staff came out to the skip and try to scream as loud as I could through the gag. After a couple of hours I heard the sound of a loud engine, and a beeping noise..  I started to panic - this was surely not the truck to collect the skip today? Clank.. Metal on metal.. Bump..  clank again..  then the sound of chains..  Then a sudden movement..  the skip was being picked up...  shit...  true panic now as I realised this was when the collection time was..  screaming as much as I could - it was no use, certainly not gagged and in all the card, and above the sound of the engine on the truck lifting the skip up. Genuine and very real panic now..  this has suddenly turned really bad, and is really happening.. I'm going to be taken away as garbage.. This is not my little fantasy anymore, I'm trapped, stuck and nobody knows I'm here, nobody can hear my efforts to shout. I can't think how I can be saved at this point..  My mind is racing, I'm screaming as much as I can, hoping, just hoping that someone might hear my muffled screams above the sound of the truck and machinary. I feel us land with a bump. The skip is clearly on the truck with me trapped inside.. still screaming.

After a few more minutes I can sense movement...  this is it..  we're heading off to the landfill..  I start to accept my fate...  I'm going to be buried alive there... my fantasy went wrong and actually turned into reality...  I made a mistake, a big mistake. 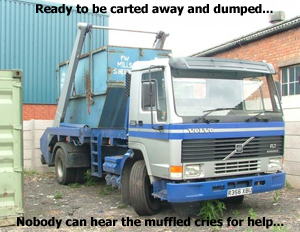 A refuse truck pulls up at the landfill site with a large enclosed skip on the back. It backs up to the latest place where directed and reverses. The truck lifts up the end of the skip and tips it at a steep angle and shakes it. I am now laying with my feet above my head, trapped in card, about to be thrown down into the tip and there's nothing I can do to escape...

I try as much as I can to get free but it is useless. The cardboard starts to fall out, and I fall with it, landing with a thump. I try to scream again, but almost immediately I swamped and buried in the remaining card. I try to move my arms, but they're useless and numb - yet another failing of my plan that I hadn't thought through properly. In the next 15 mins two more trucks deposit their contents on top of the card. Household waste, bags of rubbish piling up on top of me under the card. Eventually it becomes too much weight to attempt to struggle.

And so I lay here, utterly pressed and pinned down under an imense weight, with no hope of survival or freedom... shallow breaths coming through the small holes in my rubber hood. Stupid man.. If only I hadn't have used the gag and hood I'd probably be ok now, embarrassed, but ok. I wouldn't be here, more-or-less buried alive, waiting for the machines to cover the pit and properly bury me, seal me over - gone forever...  without a trace.

Stupid fantasy. Stupid mistake...  no-one will ever know what happened to me.  My last breaths are running out now, I make one last weak attempt to break free of my bonds, but I know it is futile... there is at least 7 or 8 feet of rubbish on top of me that I'd never have the strength to dig through.. Nobody will ever really know what happened to me... I really didn't mean it to go this far - it was just a fantasy...

I am fading, but I can just about hear the roar of the dozer engines as one last torment to me...  hearing my own final burial..

A worker at the landfill continues to do his job driving the dozer, filling over the waste that has been delivered that day, completely unaware that down there somewhere is a living man and he is sealing his final fate.

If you've enjoyed this story, please write to the author and let them know - they may write more!
back to
trashcan stories