Another tale of Mistress Messiér's household

My name is AJ Pine, and all I wanted was a cupcake.

Oh sure, I'd heard rumors about the sort of things that happened in Mistress Messiér's house. But I didn't take them very seriously. The money was good, and plenty of staff made the hours easy and the work light. Okay, sure, all of us running around in black PVC maid uniforms was kind of strange; but I looked smashing in mine, and yay rich weirdos, am I right?

But if there was one thing that Mistress was famous for, it was her dinner parties: and not the main course, either. I mean, those were wonderful enough, and there was always enough left over for the staff to pillage. I think that was intentional. But the desserts! Oh lord, the desserts. Chocolate cakes, layered until they should have fallen over. Chocolate cream pies, vanilla cream pies, and lemon meringue all boasted the fluffiest of toppings, and sat light as a feather in the stomach. We served rich, thick, smooth puddings; moist, delicate yellow cake and sponge cake cut into adorable shapes; and those cupcakes. One bite of the devil's food cake and the amazing buttercream icing, and you knew you'd spend an extra day in Purgatory atoning.

And that's where it went wrong. You see, we never get any of those, the guests don't leave us a scrap. And there's tons of it. So, one day, a couple of evenings before the party, I crept into the kitchen on a mission. I'm a little short, so I had to bring a step stool; but in the top cabinet hid my objective. I opened the door, and there was a tray of chocolate cupcakes. In no time I had the paper off one and half of it in my mouth. There wasn't time to savor it, but it was so incredible!

And then a shadow fell over me. Redheaded Iscah, supervisor for my section, stood over me with an angry expression and a threatening wooden spoon in her hand. I had to admit, scared as I was, that the black PVC uniform looked great on her too. Or... was the fear helping that?

"I don't doubt that for a moment," Iscah answered. "In fact, I'm sure you don't know how sorry you are yet. But you will." And she dropped the spoon, and in a movement I was completely unprepared for, grabbed me around the waist and slung me over her shoulder.

Did I mention I was a bit short? Iscah... isn't. I just hung over her with my composure completely gone. I remembered Mistress saying we could be canned for rules infractions, but a single cupcake wasn't worth being fired for! Well... okay. It wasn't the first. But my sad-kitty-eyes-look had done the trick with the other maids. Didn't look like it would with Iscah.

It wasn't a complete loss. The backs of Iscah's legs were quite lovely poking out from her pink-trimmed vinyl skirt, and I had some time to look at them as she carried me into the lift and it began to move down. When the doors opened, I quickly figured out that we were in the ground floor utility room - I could see a small pile of stuffed trash bags in the corner, rubbish that wouldn't stink up the place until we took it out. Then I heard a creak, and a thump, and I slid down from Iscah's shoulder...

... into the depths of a huge black trash can, lined with a heavy liner and already holding a few small filled plastic bags that cushioned my landing. I couldn't easily see over the the rim of the can. "What? What the hell is this? What are you doing -" I started to yell, but Iscah produced a ball gag from somewhere and swiftly, expertly fastened it on me. I could only grunt with frustration, and didn't react in time either to her binding my hands together from fingertips to wrists with a small roll of plastic shipping wrap.

Iscah reached down and grabbed a slightly smaller plastic trash bag that I'd been sitting in unaware. I say slightly, because she was able to bring it up over my head and twist-tie it shut. Her quick fingers poked a few air holes in the plastic, and the next noise sounded a lot like someone had equipped the can with a vent fan.

"Sit tight," Iscah sighed. "We'll see how much trouble you are in." A heavy thump sounded, it got dark, and I heard a metallic snick. This wasn't good.

Time passed, I have no idea how much. We don't wear watches at work, and I didn't have a chance of getting that lid open. I was getting plenty of fresh air though, and had resigned to waiting it out, when I heard steps, a filled bag being set down next to me, and the lock click open.

And there was light! Iscah undid my bag, and took off the gag. I wasted no time. "I said I was sorry!"

"She's got so many desserts, what difference did those make?"

"Because those were for tonight. You know the rules around here, Pine. Get caught snitching desserts, you get canned."

Ohhhh. Cute. "I thought that meant I'd be fired." I wiggled around in the can, making my bag rustle in the faint hope it would suddenly inspire Iscah to let me out.

"Nope. Around here, you get canned. Now hold still." She reached down to where I'd heard her set her filled trash bag, and when she stood, she held one of Mistress' heavy, thick cream pies. Five seconds later, I realized with a shock that she had shoved that pie right in my face! The goo oozed to the top of my head, into my ears, down the neckline of my uniform, and into the bag where I sat.

My bound hands did suffice to clear my eyes and nose. "Ack! What - what the heck was that?"

"Mistress sent me down here to throw away some things. Too bad there was already something in the can..."

"Well, you wouldn't want actual garbage in there with you, right? Ewww." The way Iscah said it left my own status uncertain.

I had another thought. "Um... Those are awfully tidy pies for having been in the bottom of that trash bag."

"You talk a lot." And she got it from I don't know where, but Iscah picked up a big red bucket that I found was full of chocolate brownie batter, because I could easily taste it as it ran down my face and hair.

"Funny thing that, you'll find that its some of the best conditioner around. Not that you'll see a shower soon." And no sooner had I cleared my eyes and nose then that she-devil clamped two vanilla cream pies to the sides of my head, like a pie sandwich.

"Noooo," I protested vainly, "I thought we were running short of desserts..."

"Heavens no. Not in this household. It's the ones you got into that upset Mistress. Why, if you'd asked, I'm sure she'd have made you a cake."

Yeah, funny lady. "Why do I think that meant I'd have been covered in frosting and had little candles perched on me?"

"At least you would have been safe from dripping wax! Speaking of cake," and a huge mixing bowl overfull of yellow cake batter cascaded over my face, and down my shoulders, and I'm sure that witch got a ton of it into my cleavage on purpose.

"My goodness - it really is noisy in here." And she pied me again, and again. Would this never end? "And finally... you liked the cupcakes so much... Mistress arranged something special."

Oh no. One, two, three, a dozen, I lost count of how many of those cupcakes were cruched into my hair, my face, my ears, my bosom. To be honest, the one Iscah shoved in my mouth was kind of enjoyable. But when she finally got bored, I was a complete wreck.

"That's the lot. And now, time to take the trash out." I couldn't even speak any more, even without the gag. She closed the inner bag over my head, lowered the lid, and... no. Are you kidding me? No way. No way at all. My can tilted back, then rolled forward. I was moving.

I called out again, uselessly. "I said I was sorry!" It didn't matter. We bumped over the doorsill - that wasn't fun - and I could immediately hear the patter of raindrops on the lid of the can. Finally, motion stopped, and Iscah opened my lid and bag again.

"And there you go. Mistress said to take the trash out, and I did. You've got air holes, so you should be fine until she calms down and I can bring you back inside. Doesn't usually take more than an hour or two." Then... oh, then... Iscah kissed me.

I couldn't believe it! How dare she! After all that had just happened, how could she do that? And... and... how could I have liked it?

That was a pretty nice kiss...

I guess I fell asleep. I didn't know what time it was when I awoke, so I started banging on the lid as best I could through my bag, and with my wrapped hands; it must have been two hours by now. After a short period, the lock clicked, and the lid opened. Bright light, blinding light! How long had I been in there? It was dark when she kissed me!

Someone, I couldn't see who, stripped the wrap from my hands and shoved a damp rag into them. I cleared a little of the gunk from my face, but once I could see, no one was there. My small step-stool sat next to the can, and I climbed out with some difficulty; my hands and feet were still slippery, and I didn't want to fall. The utility room door stood open. I walked inside. From behind a hanging tarp sat a huge table of the desserts similar to the ones with which Iscah had tortured me, and a note.

"I am aware of what has passed over the course of the night, and I feel you may have properly learned your lesson.

"However, Iscah overstepped her bounds a few times, and we cannot have that in this household. She will be down shortly, and does not know you have been freed. Would you assist me with some correction?

I looked at the pile of filled black plastic bags which still sat against the wall. My gooey face slowly wore a grin. The wheeled bin would have to stay outside; but now that I knew I was no longer canned... it was time for Iscah to get trashed. 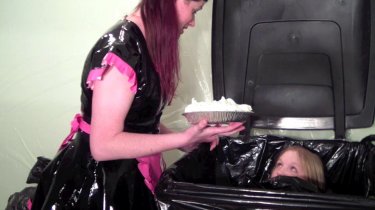 (Want to see what you've just read? Check out http://umd.net/download_info/can_it_2 for a free trailer of the "Can It!" video!)

If you've enjoyed this story, please write to the author and let them know - they may write more!
back to
trashcan stories